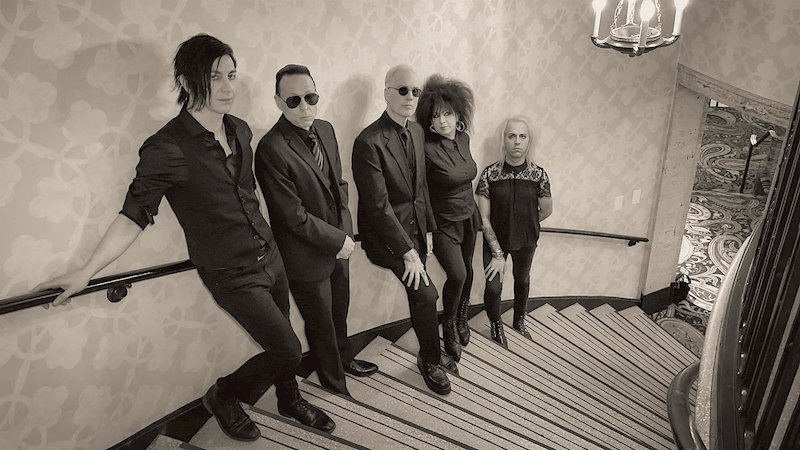 Chicago-based dark alternative post-punk outfit The Bellwether Syndicate presents the single ‘Dystopian Mirror’, a powerful dark and lush taster of the band’s ‘Vestige & Vigil’ album, which is scheduled for release in the first half of 2023 via Sett Records and Nexilis Records, a division of Schubert Music Europe.

Having reached #11 in the German Alternative Charts (DAC), this glam-noir single wields a relentless assault of hard-edged guitars, buzzsaw synths and tribal beats set the stage for a guided tour through the realm of the unwell, spat out with sardonic conviction by the voices in your head.

Six years in the making, the forthcoming album ‘Vestige & Vigil’ was produced by William Faith, whose credits include Jarboe, Clan of Xymox, Bootblacks and Autumn, and Chad Blinman (Face To Face, Jarboe, Faith and The Muse). Recorded by William Faith at 13 Studio in Chicago, it was mixed by Blinman at The Eye Socket.

“Dystopian Mirror was written about a dear friend of ours, who lost his mind, and eventually his life, to drugs and alcohol. I found that I was still grappling with the sense of loss and lingering anger about the whole thing years after the fact and, ultimately, all those feelings and emotions ended up coming out here, in this song. The lyric is meant to be coming from the voices inside his own head, during his descent into the realm of the unwell,” says William Faith.

William Faith is a former member of seminal goth acts Christian Death, Mephisto Walz and Shadow Project and also co-founder of Faith & The Muse. In 2010, he moved from his native Los Angeles to Chicago to form The Bellwether Syndicate with his wife, Sarah Rose Faith a.k.a. Scary Lady Sarah.

An underground legend in her own right, Sarah has been one of the scene’s most eminent DJs and club promoters for decades. She hosts Nocturna, the longest-running goth event in North America, which takes place at Metro in Chicago. Apart from forming the nucleus of The Bellwether Syndicate, the two often DJ together as The Pirate Twins.
The Bellwether Syndicate debuted with ‘The Night Watch’ EP in 2013, followed by their 2018 single ‘Republik’.

‘Dystopian Mirror’ is out now, available from all fine digital outlets, including Apple Music, Spotify and Bandcamp.